A System of Zone Trapping 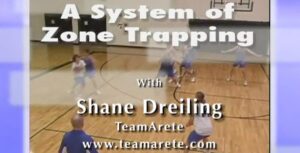 This video covers the 1-1-3 zone defense in the half-court and 3/4 court along with the 3-2 zone in half-court. The 1-1-3 in this video is not the normal 1-1-3, but an aggressive defense which features trapping and constant ball pressure. The defense is then extended to 3/4 court and the slides for trapping at half-court off the dribble and deeper in the front court off the pass are shown. The video finishes with an overview of the 3-2 zone defense.

Shane has coached on the professional, college and high school level for over 15 years. Currently rebuilding Word of Life HS girl’s basketball program, Coach Dreiling has coached at Newman University and Friends University in addition to the Independent School, Wichita State University, and Goddard High School. As head coach of the Dallas Cyclones professional franchise in the SBL, Coach Dreiling led the Cyclones to a 18-0 championship season in 1999. A popular face on the camp circuit, Coach Dreiling has worked numerous basketball-teaching camps across the country and has been a guest speaker at regional and national coaching clinics. He has also worked for several basketball recruiting services across the nation, including the National Scouting Report. Shane has written ten books dealing with various basketball coaching topics and has also put together two popular coaching videos on zone defensive attacks and his Power 3-2 man-to-man offensive set. He has contributed basketball articles and plays to a variety of websites and basketball publications throughout the world. He is a member of the National Association of Basketball Coaches (NABC), the Kansas Basketball Coaches Association (KBCA), and the National Association of Intercollegiate Athletics Basketball Coaches Association (NAIA). Shane received his B.A. degree from Wichita State University in 1994 and later obtained his M.Ed. degree in Sports Administration from Wichita State University in 2000. Shane and his wife reside in Wichita.