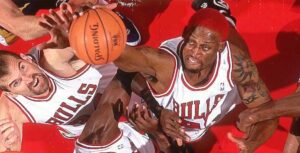 Coach Becher has coached at the NCAA Division I, II, III and NAIA levels, as well as both men and women during his coaching career. He was one of the youngest NCAA head coaches in the nation when he took control of his first program at the age of 27 years old. Regardless of the school or level of play, his teams have consistently been among the nation’s elite when it comes to rebounding, including 2014 when they set a national record for having a +19.9 rebound margin. In this video, Coach Bechler shares the philosophies and drills that have helped his teams achieve tremendous rebounding success. Learn how to develop an aggressive mentality in your players that have them constantly competing at their highest level. Coach Bechler teaches principles and tips for toughness that will improve your rebounding offensively, defensively and in the free throw lane.

Jamy Bechler works with teams ranging from the NBA to the Big Ten to the high school ranks.  Before he became one of the top experts in the field of team leadership and the author of The Leadership Playbook: Become Your Team’s Most Valuable Leader, Bechler was a successful college basketball coach and high school athletic director.  As the Director of Athletics at Marion High School in Indiana, he oversaw the Marion Giants winning their 8th boys’ basketball State Championship.  Nobody in Indiana High School history has more. Marion plays in the Bill Green Arena, which is the 5th largest high school gym in the nation (7500 seating capacity). It is the home of basketball stars Zach Randolph, James Blackmon, Jr., Scott Wood and Julius Mays to name just a few. Prior to leading the tradition-rich program at Marion, Bechler was the head women’s basketball coach at Martin Methodist College in Tennessee. He took the reigns of the RedHawks program in May of 2010. He became the program’s all-time leader in wins and winning percentage. During Bechler’s tenure, the RedHawks achieved a number of memorable accomplishments including breaking the school record for wins in a season (23 during the 2013-’14 season), earning the SSAC Co-West Division Championship in just their first year in the conference (2013-’14), advancing to their first-ever TranSouth Athletic Conference Championship Game (2012-’13), achieving their highest NAIA ranking ever at 19th (January 21, 2014) and receiving the NAIA’s Champions of Character National Women’s Basketball Team Award for their community service activities during the 2013-’14 season. The RedHawks were known for their rebounding prowess. During the 2013-’14 season, they led the nation in Rebounding Margin (+19), Rebounds per Game (55 rpg) and Offensive Rebounding Average (21/game). They were among the NAIA’s Top-10 in each of these categories in all of Coach Bechler’s years at Martin Methodist College. In addition to their rebounding toughness, they led the nation in Field Goal Percentage-Defense during the 2013-’14 season limiting opponents to 33% shooting. They also led the nation in getting to the free throw line three times and finished 4th in scoring twice at more than 80 ppg. WHAT THEY’RE SAYING . . . “Coach Bechler’s teams have consistently had a statistical advantage in rebounding vs. their opponents.  As with anything, there are always reasons why. This video gives an inside look at how he teaches and motivates his players to win the battle of the boards.” (CHRIS HOLTMANN, Ohio State head coach) “Jamy Bechler’s teams notoriously play hard and work the boards.  Rebounding is a definite factor in winning games and this video can help your team improve in that area. Jamy is an excellent teacher who has built successful programs. This coaching tool will specifically address how rebounding has contributed to this success.” (DEAN LOCKWOOD, Tennessee Lady Vols assistant coach)