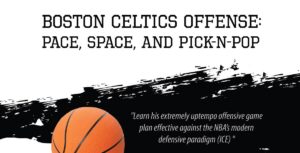 Brad Stevens and the Boston Celtics aren’t using one particular system like the Princeton Offense or Read & React Offense. They are using parts of all the best systems and piecing it together to make it all original.

Pete Carril associates to the Princeton Offense, just like Tex Winter with the Triangle Offense. Phil Jackson is known for using the Triangle offense when he coached with the Chicago Bulls and Los Angeles Lakers.

The Triangle Offense won because they would usually have skilled basketball players like Michael Jordan or Kobe Bryant playing in that system. They were best in isolation.

Brad Stevens doesn’t have great players on his team. He got creative and had come up with an incredibly uptempo game plan that is very effective against today’s NBA defense. Most NBA teams run the (ICE) defense on the pick & roll. The Boston Celtics Offense was created to use his player’s strengths and not their weaknesses. Pace and Space are what most NBA analysts call Brad Steven’s Offense.

Pace means the tempo of the basketball game. Pace also means the number of offensive possession in an NBA game being 48 minutes. The Boston Celtics played at the fifth highest speed last season. They averaged 98.4 possessions every 48 minutes.

Space means the team’s ability to stretch out the defense on offense. You have to maximize your spacing to get three point options on the floor. If you can draw post defenders outside the lane, then you will open up the paint for cutters and higher percentage shots near the basket.

Brad Stevens used his “Pace and Space” Offense to make one of the league’s most exciting offenses out there. They are extremely efficient in scoring while they have a limited team in overall talent. The Boston Celtics were able to land an NBA playoff berth last year.

Stretch Four Post Players are getting more common in the NBA. They can bring their defender out on the floor and make the defense spaced out. If you have a stretch four that can shoot the ball, then you will win HUGE.

This Pace and Space Offense will have something that you can use on your team to create space and play winning basketball. Check it out today! You will want this basketball coaching playbook in your coaching library. Make sure to check out Brad Stevens and the Boston Celtics this season.