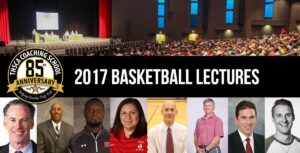 Jamie Dixon is the 22nd head coach in the history of TCU men’s basketball and begins his second season with the Horned Frogs. Dixon, a 2007 TCU Hall of Fame Inductee, returned to his alma mater on March 22, 2016, after serving 13 seasons as head coach at the University of Pittsburgh. Dixon, who has earned four college basketball National Coach of the Year honors, including the 2009 Naismith Coach of the Year, previously served as an assistant at Pitt, Northern Arizona, Hawaii and UC Santa Barbara. He enters the 2017-18 season ranked No. 12 among winningest active Division I coaches with a winning percentage of .718.

Tim Jankovich was named head coach at SMU on July 8, 2016, after four years as associate head coach. He is in his 35th season as a collegiate coach and 11th season a Division I head coach (196-126). He is 39-5 at SMU entering his second season (2017-18) leading the Mustangs. SMU won the American Athletic Conference regular season and tournament championshipsin his firstfull season at the helm.

Head Men’s Basketball Coach – Texas Lutheran University – 2016-Present Mike Wacker is entering his 33rd season as a coach, and is the Head Men’s Basketball Coach at Texas Lutheran University. In his first season, he led the Bulldogs to the NCAA Tournament as SCAC Tourney Champions and a 19-10 record. He was a Parade All-American at San Marcos HS and all-conference at the University of Texas-Austin (inducted to Longhorn Athletic Hall of Honor in 1999) before serving as a college assistant at Southwest Texas and UTSA for five years. For 26 years from 1990 2016 he coached at Converse-Judson HS where the Rockets averaged 27 wins per year making the playoffs 25 times.His overall career record was 703-196 (78.2%), including seven regional appearances & three final fours. In 2011 he was inducted into the Texas HS Basketball Hall of Fame as a player and a coach. Mike and his wife Susie have three boys, Chris, Karl & David. He is the son of Lil and Jim Wacker (deceased) of San Marcos. Among his proudest achievements are coaching all three boys over eight years at Judson HS and serving as THSCA Senior Director from Region VIII – 2001-2002.